We are pretty shocked to report that the third and last defendant was found GUILTY under s144 on May 24. He was sentenced to 40 hours unpaid labour and a £250 fine. Previous updates can be found here. This decision was immediately appealed and we will let you know the next court date asap.

The magistrates said in their “judgement” that:

In support of their claim that the defendant lived there, the magistrates said there was shower gel in the shower, pots and pans in the kitchen and a light on in the fridge. This is clearly far from a legal definition of living, especially since the defendant was not actually linked to any of the items in any way.

In support of their claim that the building was residential, the magistrates appeared to rely on the tried and trusted adage that ‘the police said it was true so it must be true.’ They ignored evidence obtained from the Council that the building had never been converted to residential.

What does this mean? We think this means that a judge (or indeed anyone with legal training) will quickly overturn this decision. Mike Weatherly says he is delighted that our friend is convicted. We will be interested to hear his reaction when our friend returns to having no convictions again in about six weeks.

The other two defendants had previously had their cases dropped on grounds of no case to answer (no comment from Weatherly about that). The only difference with the case for the third defendant was that a cop claimed the defendant had said to him that he lived in the building. This evidence was used in court despite not being taken under caution (there are grounds for appeal on that alone!) and the magistrates took it as a voluntary confession, despite it being disputed by the defence.

In order to reach this decision, the magistrates appeared to prize the word of one policeman over another, since although one had claimed that the defendant had said he lived in the building, another said he had not.

In the eyes of these right-wing dipshits, it is fine for the police to act as property protectors, an approach which has already had tragic consequences.

All in all, this trial was a farce, with untrained magistrates being asked to implement an ill-thought out new law. They failed to do their job properly and the only good thing to come out of this conviction is that hopefully a decent legal precedent will be set on appeal which makes clear what ‘living’ and ‘residential’ mean in the eyes of the law. We do not doubt that this will lead to our friend’s conviction being overturned AND this new law becoming unworkable in practice.

PS Thanks to everyone for their continued support and props to the entire public gallery for walking out when the magistrates unveiled their prejudices. 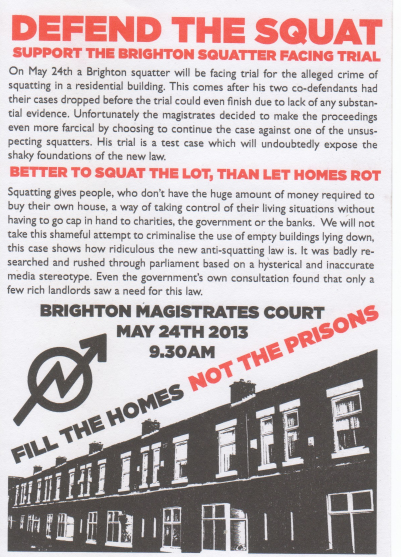 See you at Brighton Magistrates Court, Edward Street from 9.30am or on twitter @housingwar …

Thanks to loc(A)motive squat lausanne: 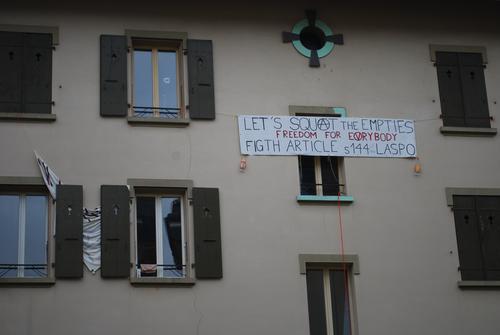