In 2012, as we all know, the new offence of squatting in a residential building was created by the Government, following a moral panic in the media whipped up by a few right-wing politicians. After a rushed consultation, a last-minute clause was added to the Legal Aid, Sentencing and Punishment of Offenders Bill (LASPO) which meant that it was never properly discussed in the House of Commons. The bill was then pushed through the House of Lords at midnight. Section144 criminalises trespass in a residential building with up to 6 months in prison and/or £5000 fine. Previous campaigns to criminalise squatting in the late 1970s and mid 1990s had failed, unfortunately this time it partially succeeded. This new law is ridiculous and has already had fatal implications. Daniel Gauntlett froze to death outside a derelict house in Kent after being told he would be arrested if he entered.

When the new law was under discussion, Leslie Morphy, chief executive of Crisis, said: “A year’s imprisonment for some of society’s most vulnerable and desperate people is draconian and utterly counterproductive. Independent research is clear that 40% of single homeless people have resorted to squatting.” She proceeded to say “they squat out of necessity, not choice, in atrocious conditions where they are least likely to be disturbed. These are people that need help, not a year behind bars and a £5,000 fine” (the maximum penalty later became six months in jail).

A Freedom of Information request of January 2013 reported 102 arrests across the UK with 13 convictions. Three of these have resulted in custodial sentences. A SQUASH report analyses these figures in greater detail.

Three squatters were arrested in a building in Brighton in September last year after a a seven hour stand-off and they intend to fight the charges. This website is set up to support them.

Since then many squatters have been evicted under threat of arrest and in Romford two men have been convicted of squatting a pub, despite the consultation paper stating plainly that “the Government will not seek to criminalise squatting in non-residential buildings, such as disused factories, warehouses or pubs.” In the main, it seems that a standoff has developed where the police are fairly reluctant to charge people, but will use it to evict under threat of arrest, especially when the squatters are seen by them as easy targets.

This might then explain why 41 out of the 95 people arrested for squatting by the Metropolitan police were Romanian (who perhaps but not necessarily were inexperienced squatters and/or could not speak English very well to assert their rights). The Evening Standard panted excitedly that “some will see the squatting statistics as justification for ending the migration rules — which only allow Romanians and Bulgarians to work here in agricultural jobs or as self-employed.” Not us.

So how many people are actually squatting? This seemingly arbitrary figure of 20,000 has been bandied about a lot, but I suspect it could be a lot higher in reality. The managing director of a “vacant property specialist” firm stated in the Evening Standard in 2012 that “There are about 100,000 cases a year in the UK, and there is significant risk that comes with that,” although of course the more squatters the merrier in terms of his business.

There is really no way to tell, however we do have firm statistics on the number of empty buildings. According to the group Empty Homes  as of November 2012 there were 710,140 empty homes, just over 3% of the total stock. (Click on the pic to the right to enlarge.)

What is really going on? Might the Government have decided to criminalise squatting to prevent people from occupying houses as the cuts start to bite? In December 2012, Shelter released a report which claimed that one in every 115 households across England is at risk of homelessness. It stated that “in the 12 months to September 2012, 198,470 households were threatened with losing their home – equal to cities the size of Liverpool or Bristol being evicted or repossessed”.

How could this be happening? Well, the writing has been on the wall for a long time. To turn again to the experts, Shelter produced a report in 1991 which argued that unlike most other European countries, where housing policy is based on “reduction of inequalities between different forms of housing, or responding to changing housing needs,” in England housing policy “has been driven primarily by the wish to increase owner occupation and reduce the role of local authorities in providing homes for rent” (‘Urgent Need for Homes’).

A group of 40 lawyers recently wrote to the Guardian, saying that “none of the 33 known arrests so far (leading to 10 convictions and three prison sentences) involve the squatters having displaced people from their homes. The properties concerned were all empty.” This meant that the predictions of a previous letter signed by 160 housing experts were correct, despite the signatories being described by Grant Schapps as “sadly out of touch“. They had suggested that the law was not needed and would end up being used to protect emptiness.

One of the signatories was Andrew Arden QC, a leading expert on housing law, who said “The only difference from the old law is that it wasn’t criminal before, until you were asked to leave. It is a superfluous law that criminalises action taken by the most needy whose housing needs are certainly going to worsen.” This at a time when, as the Independent reports, the latest Government figures show 34,080 families were homeless in 2012, up 12 per cent on the previous year. 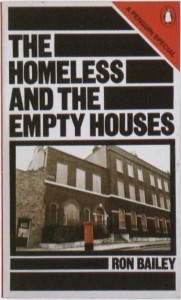 As Polly Toynbee warned last year, “The epic scale of the crisis now unfolding is only just dawning on some: most of the public may not see it until late next year” but she argues more recently that “Labour’s answer must be build, build, build.” I don’t agree. Surely the first act should be to use the empties, exactly what the squatters have been shouting from the rooftops since the 1970s as in Ron Bailey’s book The Homeless and the Empty Houses. For all its dumbing down of the issues, the Great British Property Scandal did a good job of arguing precisely that.

The winds of change do seem to be slowly picking up. The Government is considering a plan to make it easier to convert offices into residential. Yet remember that this is also the Government which criminalised squatting, probably because it saw better than anyone else that we are heading into a housing crisis the likes of which we haven’t seen since the 1970s (when a strong politically active squatters movement arose).

Can we mobilise and take action again? Well it’s not going to be easy, but it doesn’t seem impossible. Putting people in prison for occupying empty property won’t help solve the housing crisis. We’ll have to solve it ourselves. 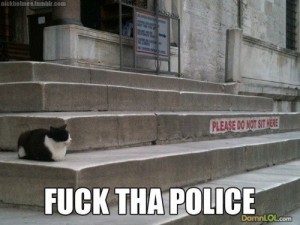 This is an abbreviated version of a text available at brighton.squat.net.